My hair loss made me suicidal – Take 5 Magazine – September 2008 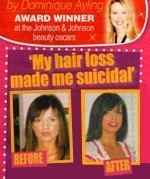 I was mowing the lawn when I noticed my finger was really itchy. I’d been bitten by some kind of insect. Later my hand swelled and I could feel tingling up and down my arm. My GP prescribed antibiotics. It was a serious reaction but we didn’t know what caused it.

A couple of weeks later, in June 2006, my hair started falling out. There were clumps in the plughole, scattered over my pillow and clogging up the vacuum – it fell out everywhere.

I told myself it would correct itself, hiding my hair loss from friends and family by using clip-in hair extensions.

My husband, Keith, tried to reassure me but my confidence suffered so much I even felt suicidal at times. Working as a hairdresser

made me feel even more self-aware – nobody wants a balding stylist, do they? I remember getting ready for an engagement party, where my ‘before’ picture was taken, feeling so unattractive. 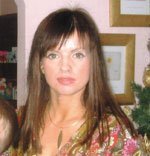 If you look closely you can see the clip-ins in my fringe and when people asked if I’d had my hair cut I was devastated. Eventually, I

decided it was time to take action so I contacted trichologist Sally-Ann Tarver. I had lost 65 per cent of my long brunette hair and was feeling really depressed. Sally-Ann prescribed iron tablets and vitamin B and Lycopene supplements.

We also took a good look at my diet and lifestyle and I started making healthier choices. Sally-Ann explained it would be three months

before I noticed a difference and two years before my hair regained the same length and thickness as before. By the beginning of this year, my hair was almost back to normal but it took me until recently to part with my extensions. Losing my hair was devastating, though, because it really is a part of who I am.